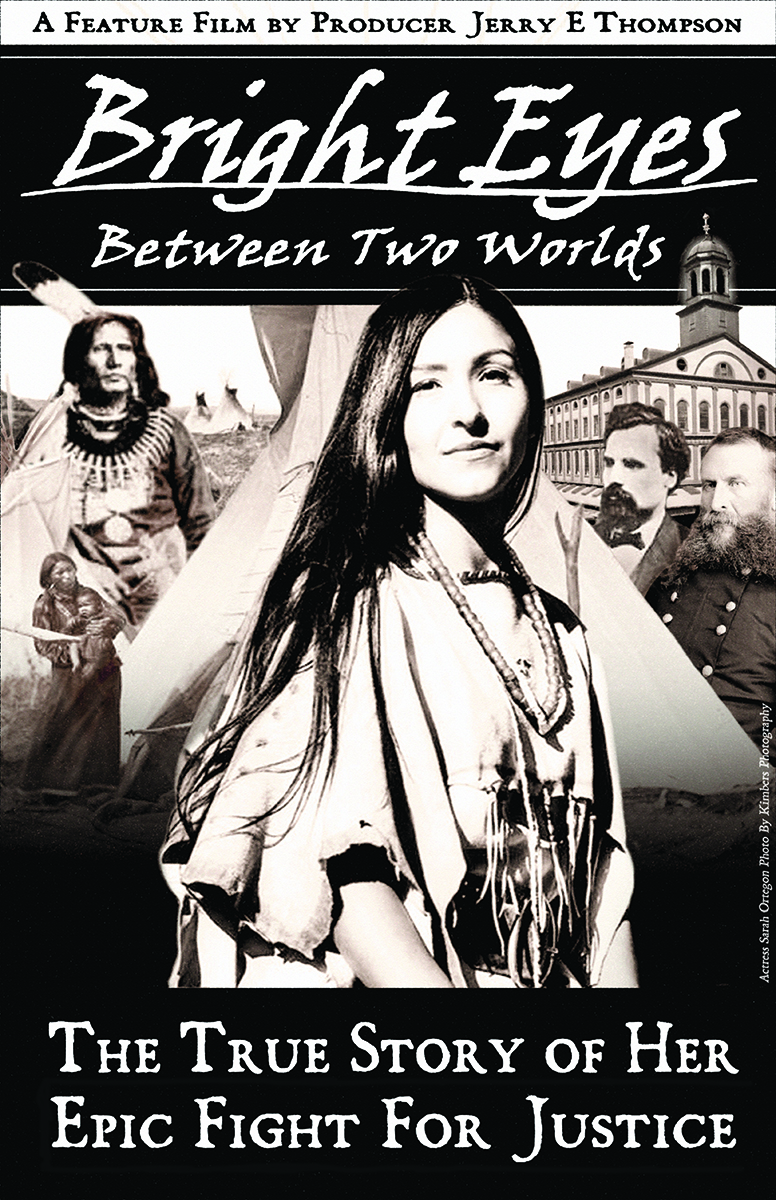 Bright Eyes is the true story of Susette La Flesche, a well-known Native American writer, lecturer, interpreter, and artist of the Omaha tribe in Nebraska. La Flesche, whose Omaha Indian name, Inshta Theamba, translates to “bright eyes,” was a spokesperson for the Omaha and Ponca tribes, and was instrumental in facilitating the court case of Standing Bear vs. General George Crook in 1879. The ruling of that landmark civil rights case was that Native Americans are “persons within the meaning of the law,” and citizens with certain rights under the U.S. Constitution.

After the trial in 1879, Bright Eyes traveled the East Coast — along with her younger brother, Francis, Standing Bear, and Omaha Herald assistant editor, Thomas Tibbles — speaking in support of civil rights for Native Americans. Her fight for justice gained the attention of such notables as Henry Wadsworth Longfellow, Louisa May Alcott, and President Rutherford B. Hayes. In 1890, Bright Eyes and Tibbles were reporters at the Battle of Wounded Knee, where they also helped the injured and dying.

Bright Eyes producer, Jerry Thompson (Pathway Films), is no stranger to La Flesche’s inspiring life story. He first learned about Bright Eyes when he was a publicity representative for the successful Native American feature film, Windwalker. With the ultimate goal of bringing Bright Eyes’ story to film, Thompson first established himself as a documentary and feature film producer. Then, in 2016, he sought and received the blessing of the Omaha Tribe of Nebraska to produce the movie.

Thompson compares Bright Eyes to the hit feature film, Harriett, the story about the black abolitionist slave woman (Harriet Tubman), who led slaves to freedom. Bright Eyes will be filmed in several Nebraska locations as well as Boston and possibly Washington, D.C. and Virginia.

“Telling La Flesche’s story through this historically based film has been a nearly lifelong dream,” shared Thompson. “The message it brings is still extremely relevant in our time.

Plans for Bright Eyes include hiring tribal members to build an authentic Omaha village, which will be left in place after filming as a tourist attraction for Nebraska in general and the Omaha tribe specifically. The film is slated for wide release in theaters throughout the United States. In the spirit of Bright Eyes, Thompson and his company, Pathway Films, are committed to dedicating a substantial percentage of the movie's net profits to Native American causes.